But what better time to not be neutropenic!  I got a call from my doctor’s office this morning, letting me know that my counts look great, and that my neutrophil count is 1700!  So I immediately got out of bed and went to the co-op to buy some of my favorite raw produce: a red pepper, a cucumber, tomatoes on the vine, snow peas, plums, and peaches.  I usually try to eat seasonally-appropriate raw produce, but who knows when I’ll get another chance to binge on this stuff?  My chemo resumes on Monday, so I’ll be back to cooking my veggies soon enough.  What I really wanted was Han Dynasty’s spicy cucumbers (thank you coworkers for getting me hooked).  Well, I wasn’t going to get delivery from them two nights in a row, so my sister and I made our own following this recipe.  They actually tasted pretty good!  We just skinned the cukes and added more chili oil, sugar, and vinegar.

It’s not a surprise that summer creeped up on me.  These days, I hardly know which day of the week it is.  I’m going a little stir-crazy at home.  I’ve been doing a lot of cooking and cleaning, which can either be very calming or maddening.  It’s a crapshoot.  Sometimes I just go lay down in our air-conditioned room for a really long time, but then I feel guilty for being lazy when everyone else is working!

Well, Spring’s nearly over.  So I shall not procrastinate any further in sharing a few Spring-inspired pasta salads that have been grazing my palate lately.  Most, if not all, of this produce is still growing locally in Southeastern PA.  I’m not sure about anything below Delaware.

Lately, I have been learning that many of the ingredients I use are almost suspiciously easy to make. I mean, they can’t taste as good as store-bought, right?  Don’t store-bought items have a better balance and texture because experts make them?  WRONG.  I have been shaking my head in embarrassment for the last month because I can’t believe I would shell out the big bucks for these things at Whole Paycheck.  Examples: nut/seed butters, tahini, fruit leather, lemonade, iced tea, pickled anything, tortillas, and ricotta. (I still buy fruit leather because I’m scared that if I keep my oven on all day, I’ll burn down the house.  But it really is easy to make.)

The ricotta I use in this recipe isn’t traditional, real Italian ricotta.  It’s the ricotta lookalike we buy in tubs from the supermarket.  The real stuff uses whey protein left over from making other dairy products.  Last year, I met a woman whose family makes the real stuff near Philly, and when I told her that I loved it, the only thing she said back was, “It’s pronounced ri-cote.”  Which makes me never want to eat the real ricotta ever again.  It’s now associated with condescending snobs.

So here’s the recipe for a friendly ricotta pasta salad 🙂  In fact, I made it using a 50% off quart of milk, so there’s not a lick of snobbery in it.  I was the only one home the night I made it, so I made one serving.  Just multiply everything by # of eaters.

Ricotta: I used this recipe from foodandstyle.com.  Add fresh lemon juice as your acid.  Mine didn’t create big curds, and it took about an hour of draining to get even a creamy consistency.  Here are my suggestions to speed up the process: use a wide cheesecloth or only one layer of cloth, add a bit more lemon juice, make sure you do only one or two stirs when you add the acid. 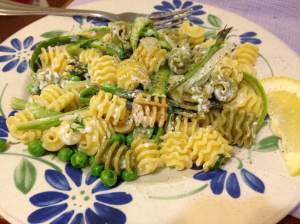 Cooking fail: I got really excited about having made ricotta, so I thought, Hmm, what would happen if I used coconut milk instead?  Whenever I overheat soup with a coconut base, it curdles… I completely redid the recipe, using coconut milk.  Vegans, IT DOES NOT CURDLE.  It actually tastes awful.  I even tried to save it buy cooking it down to a spread consistency and adding herbs, salt, and pepper (I was inspired by Daiya’s new chive and herb ‘cream cheese’ spread, which I don’t even like…)  The milk was too sweet, and it didn’t lose any of that exotic pina colada element.  No, now it was just mixed with things I want on a bagel.  Good thing it was only $1 at Big Lots!

But, vegans, don’t leave just yet.  This one’s for you.

A week or so ago, my sister and her partner came over for dinner.  Her partner is vegan (as was I for about 5 years, so I have some knowledge here), and I didn’t realize she was coming until that afternoon.  So I whipped this up on the fly, and it worked really well.

Most people automatically think of cashews when they see a vegan cream sauce.  Cashews are great, and they contain good fats, but I don’t want that much fat all over my pasta.  I also had a jar of raw almonds staring me in the face, so the solution was pretty obvious.

*When my counts are low, I wash the lemon skin really well and pour boiling water over them for about 30 secs.  It helps loosen up the inside for juicing, too.

And to end, here are some of my favorite pesto sauces.  The key to these is to wash everything thoroughly, then freeze them first!  If you want to eat it right away, just make sure you blanch any raw produce.  I usually make pestos when something’s been sitting in my fridge for a while and I don’t want it to go bad, so freezing them is part of my plan.

I love fennel.  It’s so bright and crispy, and the tender anise flavor is just enough to lighten up a dish.  My favorite way to eat it is raw with a drizzle of olive oil, a tiny bit of lemon juice, and a sprinkle of sea salt.  These days, I’m mostly pan-searing it or caramelizing it with some onions.

The one thing I don’t get is why everyone is so crazy about using fronds as a garnish.  They have such a mild taste, I can’t even tell they’re there.  But I also hate to see them go to waste.  In pesto form, the fronds are concentrated enough that they lend a mellow lift to a heavy dish, like pasta.  And they take up a lot less space in your freezer!

Just mix the following in a food processor or blender:

I made this with about 1/4 cup almonds, and the flavor was hovering too far over on the fragrant side.  Double the nuts, and it brings it back down to earth. 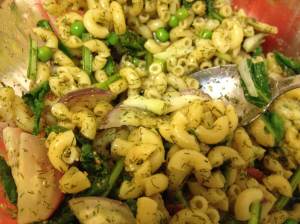 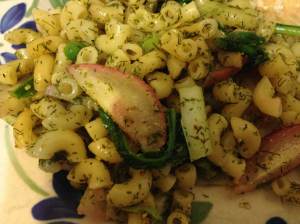 Omnomnomnomnom.  For this one, I mixed in blanched radishes, radish greens, onions, and peas.  The fennel’s slightly rough texture perfectly matches the ingredients’ zesty sharpness.

Every summer, my aunt harvests pounds upon pounds of tomatoes from her garden.  It’s almost unreal, as everyone else I know seems to uncover a new issue with the plants every year they try to grow them.  Anyway, she dehydrates them and cans some, and my mom gets some every year.  Well, when I was living with my parents, I would go into the pantry and snack on all of the dehydrated ones.  I know they’re not meant to be eaten as is, but I love them- think fruit leather, but not sugary and kind of sour.

My aunt gave me my own bag this year, hoping that would ward me off from mom’s stash.  I decided to be an adult and actually make something with them. And we had some droopy kale in our crisper.

Since my tomatoes didn’t come in olive oil, I poured 1/8 cup into the bag, along with oregano, basil, salt, and pepper. I smushed it all together and left sitting out in an airtight bag for a few hours.  It softens the tomatoes and infuses the flavors.  Then I just threw everything in my Ninja.

I used 2 leaves of kale, 1/8 cup of olive oil, and 1 oz. of mozzarella, and the taste was very tangy.  I stuffed dumplings with it, and it totally worked.  But if you want something to toss into a warm pasta dish with other vegetables, mellow it out with more oil and cheese.

Pasta salad satisfies my need for fresh crunchiness, and it makes for easy leftovers.  The pasta party lasts all summer long in my kitchen!

To end, I will leave you with a bit of wisdom: Don’t ever believe those health food bloggers who say that blending frozen bananas, cocoa powder, almond milk, vanilla extract, and ice, creates a healthy dessert that tastes just like a Frosty.  I’m eating one right now, and it just tastes like diet food.  Ick.